If you have been following me on twitter you already know I have been working on the documentary “American Marriage” with my talented friends Mike Flanagan and Courtney Bell. Please read this full post for some amazing special offers for couples getting married before the middle of June 2010. 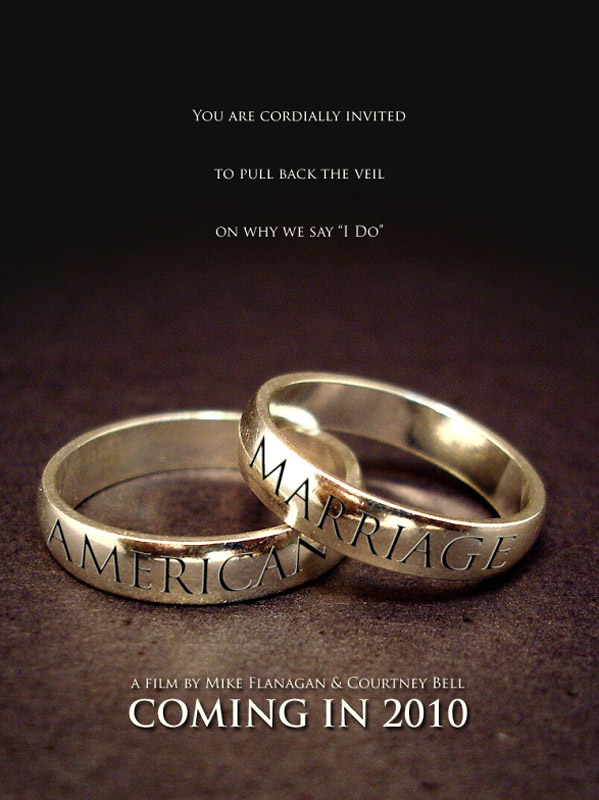 “The new documentary film “American Marriage” is looking for couples who want to have their nuptials featured in the movie. One of our main fundraising avenues has been filming weddings. Couples have taken the money they would have paid videographer and donated it to the film’s budget through the International Documentary Association (making their donations tax-deductible), and in exchange we’ve filmed their entire ceremonies and receptions and delivered the wedding video on DVD, just like a normal wedding videographer.

The shoot itself is exactly comparable to a normal wedding videographer shoot. We film the ceremony preparation, the ceremony, and reception on a single 3CCD HD Camera (the JVC 110u, a professional theatrical quality HD camera as opposed to the Prosumer HDV cameras standardly used in the wedding industry). The groom wears a microphone to ensure the highest quality audio of the ceremony. The footage is edited, and assembled with graphics, music, and minimal effects (dissolves, etc). We provide the couple 3 DVDs, authored with chapters and animated menus.

Because we’ll use some of the footage in the finished film, we ask the couple to sign an image release waiver allowing us to do so. We also ask that they make a donation through the I.D.A. and forward us a copy of the Paypal receipt before we arrive to film the event. We also ask couples if they would like to have a short “When Harry Met Sally” style interview that will be included in the movie.

You can view the trailer, which features footage from several weddings who took advantage of this model, below.”

There is no set donation amount. We ask that couples donate what they can afford. If you have a budget for a videographer we hope that, if you choose this opportunity, you would still be willing to use that budget to help the film.  If you would like to take advantage of this opportunity please click on contact in the menu above.

If you chose to make a donation and be in the film I am offering 20% off any of my photography packages. You can view my portfolio on my website.