Just before we had baby Tabitha, Claudia, from Stacy Porras Wedding Consulting, contacted me letting me know her best friend, Elizabeth, is getting married later this summer and needed a wedding photographer!  Claudia and I have worked together in the past and she knew I would be a perfect fit to capture Elizabeth and Lorne’s wedding day!  After communicating with Elizabeth and Lorne, who live in Arizona, over the phone and email about their wedding plans they chose me to capture their special day.

This past weekend Lorne & Elizabeth were in town so we spent some time in Downtown Los Angeles shooting their engagement session.  Both Lorne and Elizabeth are kind and dedicated to helping others: Lorne is a cardiologist, and Elizabeth a physician assistant.   Lorne and I enjoyed chatting about baseball and my favorite team, the Phillies.   He is related to a former Phillies player, who became very famous with the Oakland A’s after being released by the Phillies.  I am so excited to capture their wedding later this year at the Montage Laguna Beach!

Here are some of my favorites from their engagement session! Thanks again to Natalie Fong for assisting! 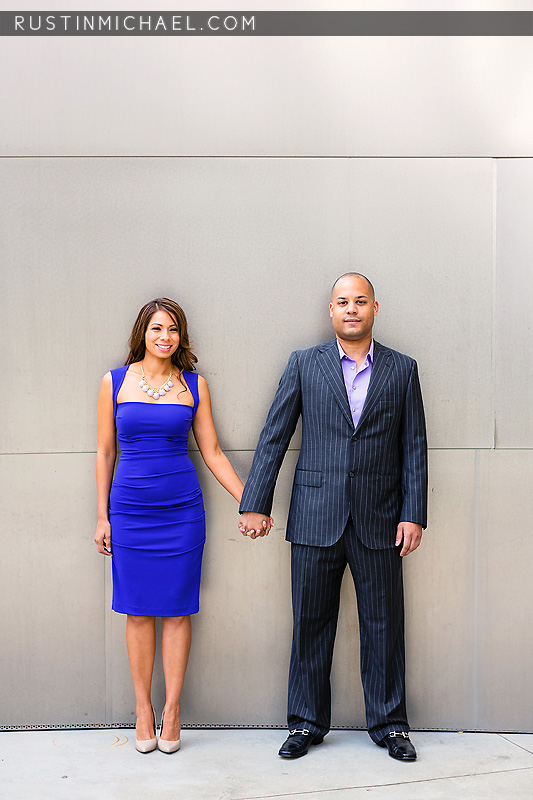 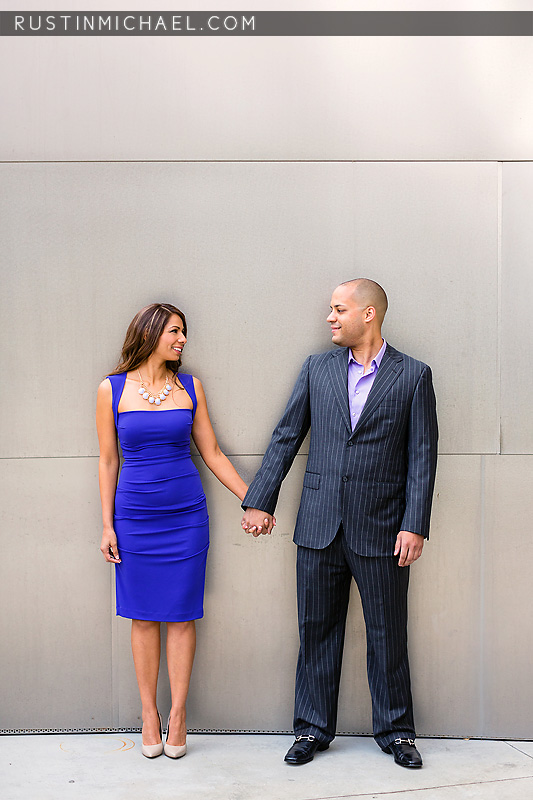 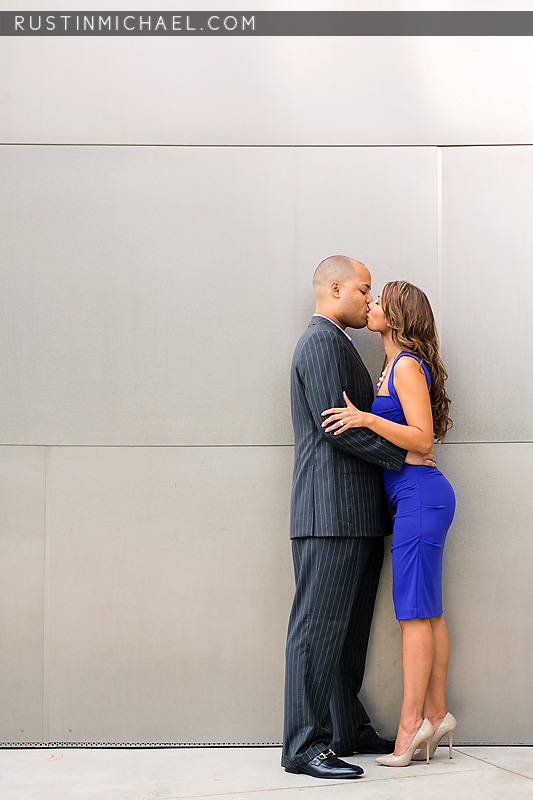 It started to drizzle as we were finishing up their session. I love the way my flash reflects off the raindrops!

[…] Last Friday I was blessed to be able to capture Lorne & Elizabeth’s beautiful wedding at the gorgeous Montage Laguna Beach. When I arrived at the Montage, which overlooks the Pacific Ocean, it looked like it was going to be a beautiful day with bright blue skies and hopefully a beautiful sunset. We were not let down! I am so thankful that Elizabeth’s best friend Claudia connected me with this amazing couple. You can read a little more about their story on my post from their engagement session. […]

Yesterday I spent some fun time with Jenny & Brian wandering around a couple blocks of the Los Angeles Arts District for their engagement session. I have known this lovely couple for a while, as they were guests at Adam & Victoria’s wedding! Once they decided they were ready to start planning their wedding they reached out to me to set up a meeting. That initial meeting in my studio was nearly two years ago!

During our meeting we talked about their hopes and plans for their wedding day and the personal goals they had before tying the knot. The biggest one was for Brian to finish up law school and pass the bar. Brian rocked his final classes in law school and passed the bar and most recently landed his first law career job!

Later this summer, a little more than two years after that meeting in my studio, they will make it official. I am so excited to for Jenny & Brian and blessed that they trusted me to capture their special day!

Here are some of my favorites from their engagement session yesterday. Thanks again to Jonathan Narvaez for assisting.

[…] I was so excited their wedding day was finally here!!  You may remember their engagement session I posted on my blog a couple months ago.  Brian & Jenny met with me over 2 years ago to talk wedding photography […]

Last night, 02/28/2013, Victoria, Gideon, Esther & I welcomed Tabitha Mercy to our family with a planned homebirth. Tabitha was born at 7:49pm weighing 8lbs and was 21 inches long.

For most of the day her labor was easy enough that Victoria was able to wrap some things up for work while working from home. I even heard her call into a conference call for work at one point. She also took Esther on a long walk around the neighborhood and started baking a birthday cake. By late afternoon things started getting serious and we let the midwives know that we needed them soon. Once again, Mary Lou O’Brien was our midwife, and helped us through the birth.  We are really happy she has attneded the births of all three of our children!

After 3 hours of hard labor and with Victoria’s water still intact, the midwife noticed Tabitha’s heart rate was dropping during contractions and became concerned.  Mary Lou O’Brien said the baby needs to come out very soon, although Victoria had no urge to push.  Mary Lou advised breaking the water bag artificially.  Victoria’s water was broken at 7:45pm and she was a champ pushing Tabitha out in 2 contractions!  Tabitha was born 4 minutes after her water broke, WOW!!!

Tabitha was in great health! Her heart rate was good and color great! The midwives pointed out though the umbilical cord had a true knot, which was likely the cause of her heart decelerations.  We are so thankful that the midwives knew what to do to help the baby out quickly.  We are also counting our blessings that Tabitha made it through the whole pregnancy with no cord accidents.

Here is a photo of Victoria trying to relax in between contractions.

Just moments after Tabitha was born

the true knot in the umbilical cord.

Tabitha was very alert and looking around from the moment she was born.

Love this photo of Gideon cutting the cord.

Love this photo of everyone watch during Tabitha’s examination.

Gideon is in love with his new little sister

Tabitha resting after her big day

The next morning with Gideon and Esther holding Tabitha for the first time.

[…] was a few days late with Gideon, Esther, & Tabitha, although her body had always threatened to kick them out earlier.  Again, with this pregnancy we […]

[…] 15 weeks after baby Tabitha joined our family, Victoria headed back to work from maternity leave. The past 3 months have been great with the […]

God bless you, what a wonderful miraculous experience!

Oh my goodness, these photos are the epitome of the miracle of life! Congrats to both of you. I love the photos of the older kids meeting their baby sister, so sweet. Good work, Daddy!

Thanks for the post Rustin! Can’t wait to meet my newest niece and glad everyone is happy and healthy!